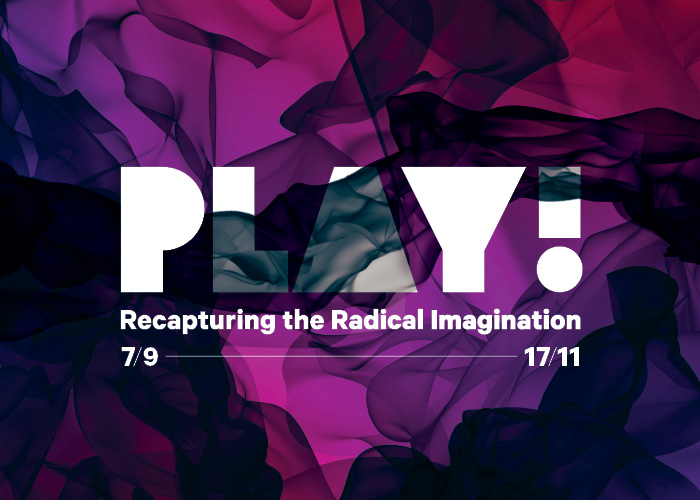 The thematic approach for GIBCA 2013 starts with a desire to investigate and critically reflect on the notions of play and radical imagination, as two important ingredients of the artistic and political discourse.

While playfulness seems to have permeated artistic strategies during the last century, radical imagination has provided a space for encounter and a frame for thought and action in today’s political struggles. However, the role and understanding of either notion and of the seamless relation between them has undergone many changes, reflecting the new condi- tions of our time and giving rise to a number of questions, such as: What is the transformative power of play? How do forms of playfulness affect or help manifestations of radical imagination? What does indeed constitute radical imagination? Does democracy still have a meaning? Do we dare to challenge the very way we live and imagine a different world?

The history and the current status of the playful blend of artistic actions and innumerable social and activist movements provide a fertile ground for such investigation. At the same time, related research and abounding experiments with curatorial models and strategies that has characterized the last decades constitute an important critical effort to rethink the institutional frame for cultural and artistic production. But with the radical restructuring of the world imposed by the neoliberal agenda, imagination has become the battle field.

With Play! Recapturing the Radical Imagination, and through the individual contributions of its four curators, Katerina Gregos, Claire Tancons, Joanna Warsza and Ragnar Kjartansson in collaboration with Andjeas Ejiksson, we hope to offer a variety of curatorial perspectives and artistic strategies. By weaving themselves together, these perspectives will constitute GIBCA as an open and dynamic meeting point for creative playfulness, social experiment, forms of activism, fiction and philosophical deliberation.

The Politics of Play

The poet Alan Gilbert recently stated that, “Politics without the imagina- tion is bureaucracy.” Similarly one could say that, “Art without imagination risks becoming a banality.” More so when one thinks of a particular kind of so-called “politically engaged” art, a fair part of which can be academic, dry, didactic, and quite simply, uninspiring and dull. But what happens when art filters politics through leaps of the imagination, subversive humor, and playful, transformative strategies? Herbert Marcuse once formulated his view this way: "Poetry, art, imagination, the creator spirit is life itself; the real revolutionary power to change the world (...)"

In art, as in life, the power of the radical imagination lies in the fact that, rather than accepting the world as it is, it imagines the world as it could be, and at the same time cracks cemented opinions and disrupts normative stereotypes. The Politics of Play explores the relationship of art and politics by way of the radical imagination and the agency of play through the work of artists who harness fantasy, poetry, provocation, subversive humor, theatricality, and disguise, to talk about current critical political issues.

How can the understanding of political issues be transformed by the artistic imagination? How can the dryness and cynical realism of much of what is identified as “politically or socially engaged art” be transcended through artistic filtering and visual transformation? How can something with negative connotations be transformed into something redemptive, joyful, even utopian, and yet still remain critical? How can the concept of play change and inform socially and politically engaged artistic practice? The exhibition showcases the work of artists who address all these issues and engage with the political and the social in ways that eschew banality, didacticism, political correctness, and the literalistic re-presentation of reality, and instead privilege creative invention, distinctive forms of visuality, and transformative leaps of the imagination.

AnarKrew: An Anti-Archives navigates the confluences between the maritime imaginary, carnivalesque strategies, and anarchist influences constitutive of the protest ethos of the city of Gothenburg. AnarKrew, a play on words between “anarchy” and “crew” or “krewe,” identifies the pirate ship crew and the carnival krewe as proximate anarchists, like the boat is to the float. Setting out on an investigative journey that reinvents the origins of the city of Göteborg in carnival, and of carnival at sea based on the contested etymology carrus navalis, AnarKrew straddles historical, fictional, and mythological narrative modes.

Taking the archives of the forgotten Göteborg Carnival (1982–1993) as a starting point and the so-called Göteborg Riots (2001) as a temporary closure, AnarKrew sets out on an undocumented journey into Göteborg’s counterculture and its wider ramifications across Northern Europe. The use of the document in artistic and curatorial practice is tested as both artists and curator make use of archival material, not so much to recover a lost era as to enable the emergence of a new one.

AnarKrew: An Anti-Archives claims a geo-psychic territory that encompasses the art gallery at Göteborgs Konsthall and the project room at the Hasselblad Center, as well as Götaplatsen, Esperantoplatsen, Kungsport Avenyn, the port of Göteborg, and the legendary Nefertiti Jazz Club as their inverted spaces. AnarKrew seeks to establish a dialogical space between disparate modes of knowledge production and complementary exhibition models to counter biopolitical manifestations ranging from obfuscation to oblivion.

Where the digital is usually seen as the anti-archives, AnarKrew deploys the instruments of its making through a memory-trigger campaign, the presentation of archives, an exhibition, a street procession, a shop window display, and a special issue of Glänta magazine.

It’s not a journey, every journey ends but we go on. The world turns and we turn with it. Plans disappear, dreams take over, but wherever I go, there you are: my luck, my fate, my fortune.

Weight is a onetime only event that transpires the theatre, a spectacle. Something like the open auditions for “The Nature Theatre of Oklahoma” in Kafka’s Amerika “It’s calling today only! If you miss this opportunity, there will never be another! … If you decide to join us, we congratulate you here and now!”.

It will happen in the Stora Teatern in the center of Göteborg, in the melancholic history of a theatre that has been marked by periods of a lack vision and ambition. A tense distinction between what is deemed significant and insignificant is manifested in the contrast between the glorious gilded main hall and seemingly useless rooms occupied by conference style furniture.

In theatre the weight is all in one spot, on the stage. A whole world is designed to emphasize this centre. All the other rooms, nooks and corners, sink down with the weight of what unfolds there. Now, weight shifts into a different theatre cosmos where different corners of the building gain significance.

The body has weight, art should have a weight. The show rests on the carnal, the physical existence, by all means experimental. It is an effort to gain a sense of weight: the weight of fate and of the boundaries of existence, the weight of a building and its history. Carolee Schneemann’s work is a constant source of inspiration, her exploration of the politics of desire, sexuality and gender through the body, where expression and liberation stands in the centre. Perhaps it is a feminist show but most importantly the weight and matter of bodies stands in the centre.

Art Crime. Legally On The Edge. A Forensic Exhibition

The exceptionally popular Swedish-Danish TV crime series The Bridge starts with the image of a blackout: the lights go off in the whole city, bringing life to a halt. This is the moment in which a “truth terrorist” begins a series of murders, aiming to draw attention to various neglected social agendas. In the past half-century, Nordic crime and horror fiction has appeared as a kind of sublimated and staged political debate in the region, a post-Marxist critique of a society hiding its vice behind an apparent harmony. Fascination with crime fiction—as the genre fan Bertolt Brecht wrote—derives from a deeply modernist project, since it represents life as logical and coherent, where every wrong must have a reason and evil eventually fails, aspiring to the phantasm of a pure society.

The exhibition is set in downtown Göteborg, leading from the Lilla Bommen pier to the city backwaters along the so-called “Quay of Broken Dreams” (Drömmarnas kaj). Its main focus is the artists’ interest in crime at large, in its performative and narrative aspects, as well as its legal and political status. It explores the roles of artists as detectives, researchers, story-tellers, but also as social advocates and activists, investigating the sphere of the illegal, the grey zones and the loopholes of the law, and the resulting potential political or activist uses. Bringing to the fore criminal transgressions and issues of public legislation—through the history of shipwrecks, the implications of forensic architecture, the witness materials of a policeman who became an artist, the social noir and the political—the show echoes the famous Adorno quote: “Every work of art is an uncommitted crime,” since art, as much as crime, wants to eradicate the status quo.

The idea is to look at different social spaces that people visit for pleasure and necessity or where they are placed by force. The artists respond to the meaning of these places, adding new layers of content and form. The exhibition is presented in locations in Göteborg where people live, work and relax.

The satellite program Extended GIBCA was first launched in 2013 and was an immediate success attracting 45 various art agents from all over the Västra Götaland region whom presented up to 56 different events such as exhibitions, educational programing and happenings. An engagement that showed the breadth of investments put into the regional contemporary art scene.

Röda Sten Konsthall, main organizer of GIBCA 2013, would like to thank