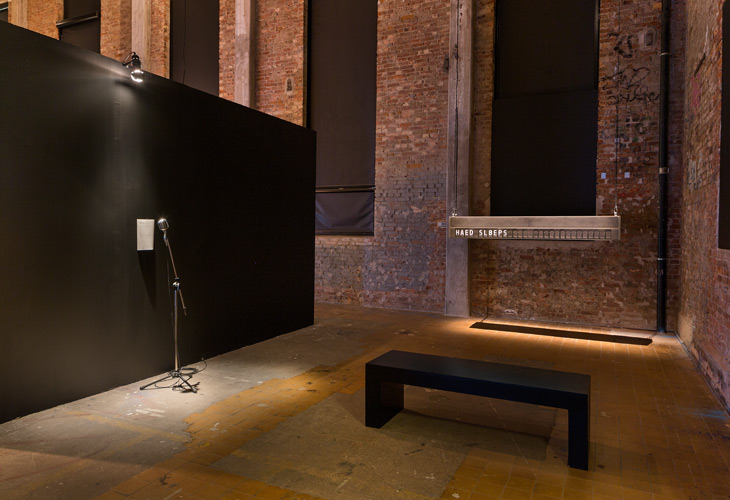 Shilpa Gupta (b. 1976, India) lives and works in Mumbai. She is an interdisciplinary artist who is drawn to how objects, places, people, and experiences are defined, and how these definitions are played out through the processes of classification, restriction, censorship, and security. Solo shows include: Half A Sky, OK Center for Contemporary Art, Linz (2012); Someone Else, Arnolfini, Bristol (2012); and A Bit Closer, Contemporary Arts Center, Cincinnati (2010). Gupta has participated in the 8th Berlin Biennale for Contemporary Art (2014); the Younger Than Jesus Triennial, the New Museum, New York (2009); the 7th Gwangju Biennale (2008); the Yokohama Triennale (2008); and the Liverpool Biennale (2006).

Courtesy of the artist and GALLERIA CONTINUA, San Gimignano/Beijing/Les Moulins.

In the motion flapboard 24:00:01 there is a slippage across the signage board, reminiscent of transit zones, memories, history. Every line appears for a few seconds before it swaps to the next. Only the words that are different from the previous line change, and sometimes the in-between characters are interchanged, creating a visual and mental play.

Courtesy of the artist and Collection of Claudio and Giuseppina Girardi, Milano.

Shilpa Gupta’s Tryst with Destiny comprises a voice emanating from a solitary, singing microphone. It projects the artist’s mournful delivery of the iconic “Speech on the Granting of Indian Independence” from August 14, 1947, by the first President of India, Jawahrlal Nehru (1889–1964). In the background hangs the speech itself, printed out from “Modern History Sourcebook” in a font size so small that it’s hard to read. The solo, functionless microphone singing to itself with no listeners conjures up a sense of loss – of hope met by despair when we perceive how far we are from a future once dreamed.